I loved the style of the Amiga 1000 – the desktop case with the keyboard “garage” underneath where it can slide away out of sight.  However it’s running pretty old tech now – even by Amiga standards.  They only have 512k RAM as standard and no expansion slots other than the same edge connector an A500 has – but upside down, just to make it even more difficult to fit expansions.  So, when I came across the GB-A1000 motherboard (designed by Georg Braun, hence the name) I immediately decided to try and source one.

I came across an unbuilt kit on Amibay and set about tracking down all the various components required to build a working board.  It was the largest project I’d ever taken on with lots of surface-mount soldering required – quite a challenge.  These are some pictures from the motherboard build process.  I started this in 2013 and just about finished by the end of 2015! 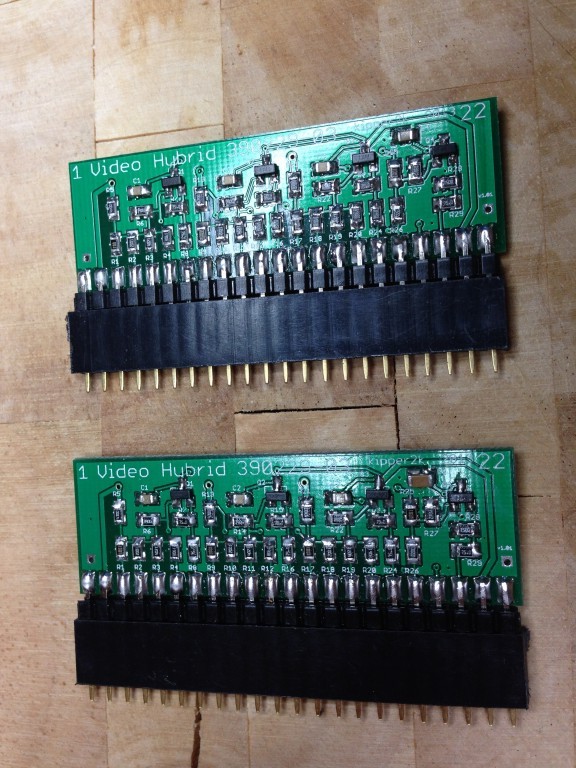 Start by soldering all of the small surface-mount components first

and then.. well nothing for 2 years according to my image archive.  I built the board up quite slowly, had a few issues sourcing parts here and there, just worked in small chunks and then left it alone for a while.  Apparently I didn’t take any pictures either – until..

Tada! Ready for the first power-up.

Will it work first time? ..

Of course it will!  Just a quick power-up at this point to make sure it all appears to work before mounting the board inside the A1000 case.  I also programmed a newer Workbench 3.1 and the IDE ROM and added a lithium battery (along with a small diode to prevent charging).  The 2.5″ IDE connector for the onboard hard disk was particularly tricky to find – eventually I had to hack down another 2.5″ connector to make it fit the board properly.  Looks ok though.

I’m using that with a 32GB Compact Flash card via an IDE converter.

When I mounted the board into the Amiga case it wouldn’t sit quite flush.  When I looked closely I could see why – the motherboard D-plugs had pronged mounting pins which went through the board but these were hitting the posts in the case.

I had to cut these off in order to get it to mount flush against the case standoffs and then I could use the self-tapping screws through the top of the D-plug to secure the plug – and the board – to the case.

So, trial fit of the motherboard into my A1000 case:

Everything seems to fit ok, let’s carry on fitting the PSU

and then the rear panel

The complete system up and running.

Right now it’s booting Workbench 3.1 from a CF card and I’m in the process of loading up WHDLoad and a chunk of old games.