I had an “incident” with my original Thorens plinth and as it turns out the Super plinth is different to the standard TD-160 so almost impossible to find second-hand.  So, I added a new plinth to my wishlist.

Well, one Birthday later and (courtesy of my Dad) here’s a new plinth in Oak from Russ Collinson at Layers of Beauty.

I drilled few pilot holes on the rear to mount the hinges for the lid and also tidied up the cables underneath to stop the possibility of them interfering with the suspension.  I used the original Thorens Super heavy base.

I’m really pleased with the plinth – the build quality and finish is excellent.  It looks great on the shelf, now I just need a new set of Proac speakers in matching Oak finish..

I built my Hypex-based 5-channel power amp a few years back, but it never quite had the sound I was looking for.

Since I was moving to Vinyl with my Thorens TD-160 Super, a friend advised me to try a valve amp.

I looked around for DIY kits and most were either horrendously expensive or underpowered.  I eventually found “Eiclone” – a 60W monobloc kit based on EL34s with PCBs and a build manual that could be purchased from Parks Audio.  The kit looked fairly easy to build due to the PCBs and could be tweaked quite easily to run different tubes if required.  I ordered the kit and sourced the parts required so I could start the build.  This is the build thread I copied from the forums over at diytube.com.

After ordering the PCBs I ordered all of the parts required, mainly from Mouser but as I’m in the UK the Hammond transformers came from www.bluebellaudio.com. Philip is extremely knowledgeable and recommended I use JJ KT88s instead of EL34s, a Tube Doctor 7025 RT010 instead of a 12AX7 and a Tung Sol 6SN7GTB. This was all ordered from www.hotroxuk.com who were excellent and cheap.

The box of parts arrived so I could start the build:

I soldered all the small components on first and then the larger ones. I’m going to mount the PCB upside down in the chassis so the tube sockets are on top and the other components on the bottom.
I used Orange Drop coupling caps but only because I mis-ordered the original ones and figured these looked cool 😉
Component side (will be the bottom) completed:

The tube sockets were a bit of a nightmare to solder straight and level. There must be a trick to this but I didn’t find it.

Both boards finished, now onto the chassis.
This will be my least favourite part – I’m terrible at any sort of metalwork. I’m using a Hammond 16x8x2 1441-26BK3 chassis which is steel rather than aluminium so not the nicest thing to cut.
I planned the design using CAD software – output transformer at the back of the chassis, power transformer at the front and the choke directly underneath. I printed this out to scale and literally stuck it onto the case with tape:

I centre-punched the drill marks and then proceeded to drill all of the holes required. I used a step drill bit to do everything other than the tube sockets. I did those with a punch which made a nice clean job of it.

The cutout for the IEC power socket I did with a Dremel and a cutting disc. I had to grind a little more material away afterwards in a few places but a trial fit with the IEC socket showed that most of my terrible metalwork would be hidden by the bezel.

There was quite a bit of deburring to do on the inside of the chassis – I did this gently with the step bit.

Time to trial-fit everything together now. I bought some nice black button head screws to try and keep everything looking neat. The holes for the tube sockets were slightly off-centre as I found it almost impossible to keep the drill and the case still when drilling the pilot holes for the punch, but luckily it doesn’t look too bad. I’m covering up the access hole for the bias pots with a rubber blanking grommet. These cases were originally a stop-gap until I had a nice wooden chassis made, but since they turned out so well I’ll probably keep them like this.

Onto the final assembly now – the internal wiring. I tried to keep the power as far away from the input signal as possible. Lots of sticky pads and cable ties used. I’ve kept some of the unused cabling from the transformers in case I want to change things around later or reuse them for something else.

After a couple of false starts in the testing phase (the bias test points TP1 and TP2 don’t work until the tubes are plugged in – I set -50V using Pin 5 on the KT88 sockets) I was ready to power up.
The both worked first time! I’ve set the bias on the KT88s to 65ma (650mV at TP1 and TP2) at the moment but will go back and re-check at regular intervals.

This is the end result:

and here they are installed: 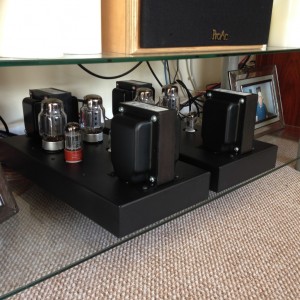 I’m very happy with the sound but they’ve been running for less than 2 hours so far so I’ll give them time to bed in and then re-check everything.
I’m off to listen to them now, thanks for reading.

The Boozhound Labs pre-amp I built needed a power supply.  The basic option was just to use a basic “wall wart” DC power supply, but knew these were generally low quality, unregulated and quite noisy.  Since pre-amp quality is pretty dependent upon power supply quality, I decided I wanted to use something better.

Again, I used a case from Modushop and a rear panel from Schaeffer.

Here are the images of the completed build. I wanted to replace my basic Pro-ject Phono Box preamp with something a little better.  After reading through some threads on diyaudio.com I found a project for a JFET RIAA pre-amp from Boozhound Labs.

The kit came with a PCB and the parts required to populate it (including Russian PIO capacitors) but needed a power supply.  I made that separately.

As with my Hypex Power Amp, I bought a case from Modushop and had a rear panel machined and engraved by  Schaeffer.

Here are the pictures of the completed build.

I’m very happy with the result and the sound quality and have been using it with my Thorens TD-160 Super.

I used a chassis from Modushop and had a rear panel machined and printed by Schaeffer.

These are the images of the competed build.

Because the amps expect a balanced input I also needed to make some phono to XLR input cables.

I was very happy with the result though later replaced the front two channels with a tube amp as I found the sound a little too clinical.